Sometimes when I looked at him, I could see his face bloated in a casket.

I had to leave Death Salon Mütter in Philadelphia this year to catch a flight right before the very last scheduled panel of the day featuring Caitlin Doughty and Sheri Booker. And I was disappointed to be missing it, to say the least, because I felt it was one of the highlights of the entire two days’ worth of programming. While I had read Caitlin Doughty’s Smoke Gets in Your Eyes (the book that turned me onto the whole existence of Death Salon in the first place) I hadn’t read Sheri Booker’s coming of age tale in the death industry, and so I thought picking it up was the next best thing to hearing her share her thoughts in person.

Nine Years Under: Coming of Age in an Inner-City Funeral Home details Booker’s experience working in a funeral home in Baltimore from the tender age of fifteen until she was twenty-four. And while there are many parallels between hers and Doughty’s experience (a young woman being thrown into an entirely foreign, at times creepy and other times comical, predominately male world, where she learns to begin to grapple with her own mortality as well as those all around her), Booker’s crash  long course in death was cultivated in a Black funeral home in a Black neighborhood, where the deceased and their families were usually Black, church-going Christians.

Black funeral homes have their own set of rules, rituals, and procedures that differ from funeral homes that are predominately white and/or that serve people of all races, and Black-owned funeral homes in Baltimore, says Booker, “line our streets like bus stops and seemed to be dispersed into every major corridor of the city.” The reason for this is because Black undertakers were not only once desperately needed by their communities, but were the only option for their communities. In the nineteenth and early twentieth centuries, white funeral homes would either refuse to serve Black people, or would agree to embalm a body only during covert hours. And it goes without saying that treating their Black clients and Black corpses with respect was not the norm. Black families soon turned to Black undertakers because they “trusted their loved ones with people who looked like them and would treat them with decency,” says Booker.

One of the first significant differences I noticed between the funeral home where Doughty worked versus Albert P. Wylie Funeral Home where Booker apprenticed, was that the former was predominately crematory-based. Much of Doughty’s experiences revolved around the retorts and the cremulator, and these particular funeral-industry motifs are almost completely absent from Booker’s experience in the death industry. This difference also stood out to me because Doughty and Booker are only two years apart in age and were both working in the death industry around the same time frame (late 1990s to early 2000s for Booker and early 2000s for Doughty). But the reason for this almost complete absence of crematory practices in Booker’s memoir is directly related to the Black community she served:

The rock-bottom deal we offered was cremation, which was only eleven hundred dollars. At the time, cremation was an act of desperation for a black family, the last resort. You could assume that they didn’t have enough money to pay for a funeral. But many families were too proud to cremate their loved ones, even if they were broke. So they borrowed money, asked for donations, and even sold chicken dinners to raise funds for a decent service.

The Importance of Wakes

At Death Salon Mütter, Booker elaborated on why many Black families in her community choose not to cremate, and though I was not there to catch her response, Twitter did: 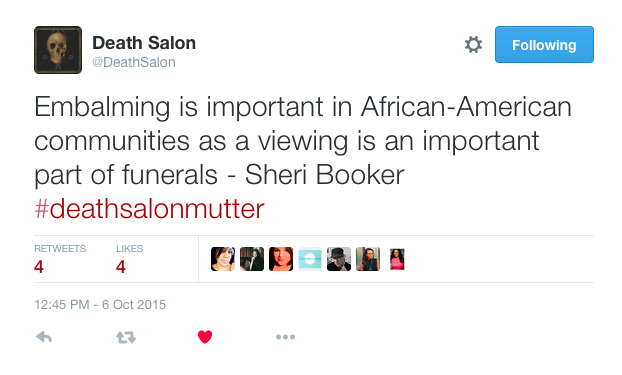 Almost every body that Wylie Funeral Home prepared while Booker worked there had an open casket wake. The only time this practice wasn’t followed is if a body had already begun to decay too drastically..

The Impact of Gang and Drug-Related Violence

Though many of the bodies that arrived at Wylie Funeral Home had not yet entered a severe stage of decay, too many of them had suffered from drug-fueled violence. “Baltimore had become a metropolis of death,” says Booker. Many of the bodies she saw were young homicide victims under thirty. But although the funeral home was right in the middle of the hood, this only made Booker love it even more. She recalls how she was “infatuated with the hood” because it was so different from her own neighborhood and had its own distinct culture:

I dreamed of buying penny candy and Now and Laters from the corner store, soaking my chicken box in ‘saltpepperketchup,’ and letting yat gaw main noodles from the Chinese joint swell in my stomach.

Gang culture affected the funeral home in a couple of different ways. For one, it determined what was ideal for a funeral service and transformed the way young men were buried. They gradually stopped wearing suits, Booker observed, and were often buried in their street clothes. Of course, these weren’t just any street clothes—they were the “latest, finest urban wear that money could buy. It wasn’t strange to see a young man wearing a Polo shirt, a Phat Farm sweater, and jeans or khaki pants for his funeral.”

But for all its vibrancy and trend-setting culture, the hood was also dangerous, and the funeral home was not immune to the violence that occurred just outside its door. Booker recalls one time when she heard a commotion break loose:

Sets of fists started banging on the front door, and what sounded like a stampede of feet raced around downstairs. Then the door opened and we heard the screams. ‘They shooting! They shooting!’ Bap! Bap! Bap! More shots exploded, and we took cover.

The difference between life and death could be just one shot, and it was for too many of the young men that Booker helped ready for their eternal rest.

Even though Booker knew that she was helping her community, and she did enjoy her work, death weighed heavily on her especially young soul (how could it not?) and she took up writing poetry to help heal the emotional trauma of what she witnessed day after day. She recalls sitting at her desk, in the solitude of the funeral home, and allowing herself to “reflect, daydream, and process all that was swirling around me.” One of the poems she penned is called “Endangered Black Man,” written for the young men she saw die from violence.

While her poem speaks to the young men involved in these specific circles, one of the stanzas so tragically captures the unsettling pattern of young Black lives being lost today at the hands of police officers. And like the young Black men who Booker remembers treating in the Wylie funeral home, these men are young. They’re usually under thirty. Sometimes they’re only children.

“And now all our people see is sorrow

And no cries of empathy do we ever hear

Never have they shed a tear

Because of you I live in fear”

Booker writes with lean, honest prose, and this makes Nine Years Under powerful. As hard as it is to read at times, it’s also witty and smart and empathetic; it’s an epitaph for all of the people who died while Booker grew up under Wylie’s roof; it’s where she tried to learn about life and death and came away with few concrete answers; and it’s where she found her voice as a poet and a writer.