N.B. The beautiful print that is featured in this post is my copy of “Ritual” by Courtney Brooke, otherwise known as Light Witch.

M Train seems as though it’s meandering, oscillating between dreams and present and past and distant past and back again, but it is actually intricately woven, and each slip into a different time plane is deliberately articulated. M Train is a book about the ghosts in our lives, and how we interact with them: do we listen to them? Ignore them? Pay them respect? Do we long for them too much? How do we mediate our grief, our longing for the way things once were, in order to continue dwelling amongst the living? 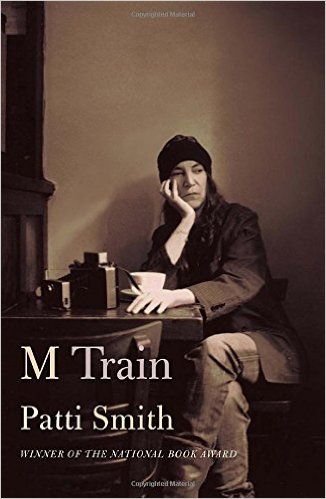 M Train is also a book about ritual. It is in ritual that we find the ability to begin tackling our grief. Grief will never disappear completely, and so we must find a concrete way to accept it; a salve that will begin to take the awful burning sensation away, or that will fill the hollows that keep us cold with warmth.

The book begins with one of Patti’s dreams, of a cowpoke, a sort of enigmatic wise man, who will visit her throughout the book and who will bless the book’s end. She is confused by this dream at the book’s start, and her confusion stems, in part, from her lingering sadness; she calls it her “malaise,” which she remedies by going to Café ‘Ino in Greenwich Village every single morning and ordering a black coffee, brown toast, and olive oil. She sits at the same table every day, and on the rare occasion somebody steals it from her, it’s upsetting. It’s her table. Her altar, if you will.

Here, at Café ‘Ino, where she thinks and writes, is also where the past visits her most acutely. Her malaise becomes most infectious before the start of, and then during, this ritual, until its finale – when she walks out of the cafe – provides her with the relief she is seeking. For the root of her malaise is her mourning of her dear husband Fred, and though she has a healthy relationship with her grief, her memory of him does not diminish over the course of the book. Time does not, in fact, heal all wounds. Patti’s longing for Fred seems to grow more fully-realized and stronger as the book progresses, but perhaps this is because we have gained her trust and she can reveal more intimate details to us as we plunge deeper into her spiritual journey.

Patti’s rituals give her strength, and Café ‘Ino is something like her conduit. Her writing, especially when describing places or objects of significance, is filled with this innate magic, which has the effect of ascribing simple, ordinary routines and objects with a sort of cosmic power; she reveals to us her talismans and amulets, which are often objects rooted in the natural world, such as crystals, stones, and coffee beans, or objects that hold powers in their own right that are enhanced by Patti’s use of them, such as her tarot deck or a cherished book.

Because Café ‘Ino is her conduit, the memories and thoughts from Patti’s daily routine of spending time there reveal direct portals into the past, where she spends pages recalling one poignant visit and all of its minute details. These forays into the past then loop back to the present, and often upon the return, Patti is venturing to that place again. For example, early on in the book, she recalls her first visit to Mexico as a young woman. She makes a pilgrimage in search of the best coffee, which William Burroughs (another ghost from her past) assures her she will find only there. When she returns from this story, back to the present, she is visiting Mexico again, to give a talk at Frida Kahlo’s Casa Azul.

Even when she is traveling, however, whether in the past or in the present, Patti’s black coffee ritual is something that never ceases. It is her mobile ritual, which she can take with her from place to place. It is poignant that she mentions her husband Fred never liked coffee; he drinks beer in all of Patti’s memories. This ascribes black coffee with a power reserved only for Patti. It has always been her elixir, and to say it’s mentioned on every other page in the book is not an exaggeration. She has always taken to it; before Fred, with him, and after him. She calls it the “clearest and simplest expression” of her solitary identity. It is her assurance, her nourishment, her eucharist, and when she does not have it, she grows uneasy. Though this is her most obvious ritual, there are other more occasional rituals she takes part in when she travels, such as removing one card from the worn pouch that contains her tarot deck each time she begins a new journey.

Often, Patti’s travels lead her to cemeteries. She visits Brecht’s grave in Germany, Akutagawa’s grave in Japan, Plath’s grave in England, and Jean Genet’s grave in Morocco. I do not think it is by chance that these are the visits Patti spends time reflecting on in M Train; this is a book whose overarching theme is death. These visits are documented by her photographs which are laden throughout her book, acting as relics, or perhaps, more aptly, as conduits to the past, for these photographs allow the dead to breathe. There are photographs of Fred, of dead friends’ and artists’  beloved possessions, of the ruin of Hurricane Sandy, of things that are now lost or absent from Patti’s life. But she keeps the channel open because she revisits them time and time again, unafraid to include them in her dialogue.

“I have come back, Sylvia,” she whispers, when she returns to Plath’s grave for the second time, as if the poet were waiting for her.

Because Smith is acutely in touch with the dead, her relationship with them is a very physical, tangible force in M Train. Just as she has always felt the intensity of storms before they break, she feels anxious on All Souls’ Day, as this is the day that Fred left her.  And though M Train moves through the seasons, ending as Memorial Day is approaching, it has a decidedly autumnal heaviness, because autumn is also the season that Todd, Patti’s brother, died, just a few weeks after Fred.

She recalls crossing a street in New York after these deaths, and the troubling, and then harmonious, feeling that came over her:

I felt a heat containing the colors of autumn. The dark stone in my heart pulsed quietly, igniting like a coal in a hearth. Who is in my heart? I wondered.  I soon recognized Todd’s humorous spirit, and as I continued my walk I slowly reclaimed an aspect of him that was also myself – a natural optimism. And slowly the leaves of my life turned, and I saw myself pointing out simple things to Fred, skies of blue, clouds of white, hoping to penetrate the veil of a congenital sorrow.

Patti begins to heal this veil of sorrow through her well-established daily rituals, but when Café ‘Ino closes and her decade old practice is disrupted, she must find the means to begin a new ritual, for she acknowledges that she must be reminded “how temporal permanency is.” It is almost to be expected that Café ‘Ino will close, for nothing in Patti’s life, not even her favorite black coat, stays for too long.

She begins to carve out her new routine after Café ‘Ino closes, venturing to Caffè Dante equally as often as she brings home a deli coffee to enjoy on her stoop. She reflects on the past, how Café ‘Ino “afforded [her] malaise with a small amount of grandeur.”

Our grief stems from our wanting of things to stay the same, even though they will not. M Train speaks to this most poetically, and describes one woman’s journey of trying to carve out a time that will stay the same, for we view stasis as sacredness, in a way, we creatures of limited time. Sometimes we find this sacredness in another person, as Patti does with Fred, and spending time with them makes it seem as though the clock is without hands, as Patti says. But when that person becomes a victim of life – of being impermanent – and the clock grows back its thin stems of black and begins ticking once again, we become resilient, and we find a new sacred space where we can safely access our ghosts without being haunted by them.

May we hold onto our rituals in a world that tells us not to.